I was 15 years old, in Latin class in the parochial high school I attended in Boston,
when Mother Antonia's voice announced over the loud speaker,
that President Kennedy had been shot.
As high school girls, we idolized this handsome president,
his beautiful wife Jackie and their adorable children.
We were frozen in disbelief, tears were shed, school was dismissed.
and we rode home on public transportation in stunned silence.
No iPhones then to call our parents, keep up with events,
divert ourselves with entertaining apps. 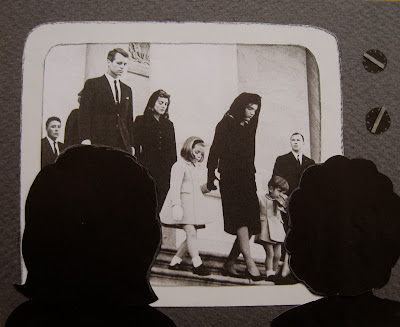 For the next few days we were glued to the TV, watching the continuous news coverage.
My sister on the left with her pouffy "flip",
I on the right with my curly bubble cut.
As we sobbed, we watched in awe as the dignified Mrs. Kennedy led the nation
in honoring her slain husband. 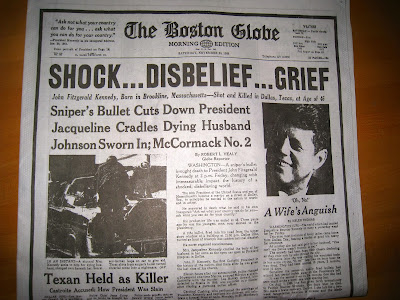 Today's Boston Globe, with an insert replicating the front page of that historic day,
brought back a flood of memories.

Where were you (or were you even around then?) when you heard the news?

I guess we all have a vivid recollection of that day. I was in the Doctor's office getting my blood test because I was getting married. My soon to be husband was a soldier at Ft. Belvoir in Va. just outside of Washington, D.C. and he actually attended the funeral procession along the streets of Washington! Thanks for sharing...

I have been watching all the specials on all the channels tonight. I was too young to remember the events of that day, but I remember being sad and knowing something terrible had happened.

I was in awe of the way the various channels have treated this day. I have seen conspiracy theories, stories on Oswald, and the life and times of Kennedy. It was nice to learn all this history I was too young to comprehend before. Thanks for sharing, too.

Judy, I was home taking care of my two small children. Lisa was 22 months and Steve was 5 months. My grandparents pulled up for a visit and as I watched them out my kitchen window, I noticed that they stayed in the car for a long time They had been listening to the radio on the long drive to my house and heard the news that Kennedy had just been shot on the streets of Dallas. They walked up to my door in tears and told me the news. We watched together as the drama unfolded on the television. I was glued to the set for the next 4 days and grief stricken. It was as if a member of my family had died. I could not hear or see enough news to try to comprehend this tragedy. I still do't understand, I never will. Jack Kennedy was the first person I voted for. I was 22 in 1960. Two weeks before my wedding, the Democratic National Convention was held in Los Angeles, not far from my job. When I came home from work every night, my grandparents were glued to the tv, watching every move this handsome, young Catholic made. They were Republicans but their Catholicism took precedence. I know they voted for him, as my parents did as well. There was a lot of controversy at that time about this but I was sure he would be a fine leader and I longed for new blood.I strongly related to Jackie. She was just a few years older and was married to a much older man, just as I was about to do. I admired her dignity and understated elegance. I remember, years later, in her bedroom in the home she grew up in in ?Rhode Island feeling so very connected to her. I always have. She got us all through a very difficult time with such grace and fortitude. I have carried her image in my mind since that day. She has always been my inspiration.

Thanks so much for sharing your experiences, Maron, Elizabeth and Julie. Yes, Julie, Jackie was my inspiration also, along with Audrey Hepburn. This anniversary of JFK's death brought up a flood of emotions and memories. I don't think that those who weren't living in those times can understand how much this tragedy affected us - yes, as if it were a death in our own families.

Judy,
I think JFK's death ended my childhood, though I was a high school freshman at the time. Innocent and naive, I had no idea anyone could entertain the idea of assassinating such a figure, let alone carrying out the deed. And his was just the first of many such murders that would take place in the years ahead. The 60s were incredible years but we lost some of America's best. 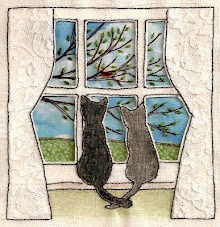